Guwahati: The ruling Bharatiya Janata Party (BJP) in Assam seems upbeat about its electoral prospects ahead of Sunday’s assembly poll verdict. So much so that the state unit president Ranjeet Dass addressed a press conference in Guwahati on Friday announcing that the BJP-led National Democratic Alliance (NDA) would win in 83 seats in the 126-member state assembly.

Claiming that the saffron party would win in 70 seats while its allies Asom Gana Parishad (AGP) and the Bodo-dominated United People's Party Liberal (UPPL) would secure eight and five seats, respectively, Dass has already unofficially conceded BJP’s defeat in 21 constituencies terming them as “doubtful”.

Of these 21 constituencies, the NDA has its sitting MLAs in constituencies such as Sonai, Bilasipara East, Mangaldai, Raha, Batadrawa, Teok, Amguri and Thaora.

Journalist-turned-Rajya Sabha MP Ajit Kumar Bhuyan has also claimed that misleading information was circulated in the name of the exit poll.

According to analysts, the 2021 assembly election is one of the closely watched ones given that it has seen entry of two new youth-led political parties, borne out the anti-CAA agitations.

(CAA or Citizen Amendment Act was passed on December 12, 2019, and spoke to Indian citizenship for people who had entered the country before 2015.)

This year’s election is also marked by the absence of two former chief ministers – Congress stalwart and three-time chief minister Tarun Gogoi and the leader of the historic Assam movement of the 1980s, Prafulla Kumar Mahanta.

Gogoi who was credited with making Assam a Congress citadel and bringing peace in the insurgency-hit state passed away last year at the age of 84.

Two-time CM Mahanta, who has not lost any assembly election since 1985, did not contest this time due to “health-related issues”.

Here are, some of the constituencies to watch out for:

Assam BJP president Ranjeet Kumar Dass is in the fray against sitting MLA Pabindra Deka, who is contesting from the newly formed Assam Jatiya Parishad (AJP) this time. Patacharkuchi is one of the keenly watched seats. Dass has moved to Patacharkuchi from his earlier Sarbhog seat, one of the two constituencies where the Left has fielded its candidate. CPI(M) Politburo leader Sitaram Yechury last month said the Left has a high chance of winning this seat.

Once a safe seat for the Left parties, Sarbhog is likely to witness direct contest between Manoranjan Talukdar (CPI-M) and Sankar Chandra Das (BJP) this time.

In 2016, BJP candidate Ranjeet Kumar Dass won the seat by defeating Anurupa Hannan (INC) with a margin of 19,526 votes. Chief minister Sarbananda Sonowal’s constituency Majuli will witness a direct contest between him and Congress candidate Rajib Lochan Pegu. In the year 2016, Sonowal defeated Pegu by over 50.74% vote share.

In 2011, Pegu won from this this constituency defeating Padmeswar Doley, an Independent candidate, by a margin of 15,964 votes.

With over 1.2 lakh voters, Majuli has nearly 45,000 population from the ethnic Miri/Mising community. 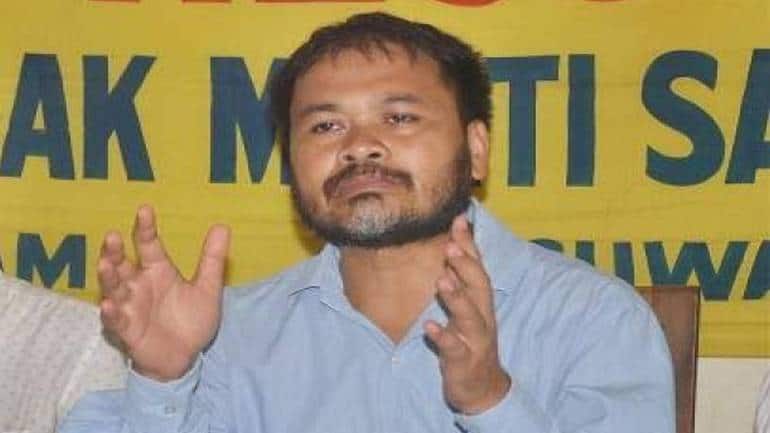 Peasant rights activist Akhil Gogoi had to contest as an independent candidate, after his newly formed political party - Raijor Dal - was unable to register with the Election Commission.

Jailed peasant rights activist Akhil Gogoi is contesting from this constituency as an independent candidate since his newly-floated Raijor Dal failed to register with the Election Commission due to technical reasons. Apart from Gogoi, the other leading candidates in the fray are Surabhi Rajkonwar of the BJP and Subhramitra Gogoi of Congress.

In 2016, Pranab Kumar Gogoi of Congress won the seat, defeating Surabhi Rajkonwar of BJP. In 2011, Pranab Gogoi retained the seat defeating Pranabjit Chaliha of AGP by a margin of 17,250 votes.

Sivasagar represents over 1.4 lakh votes, including 80,000-plus votes of the ethnic Ahom which will be crucial this time. The constituency also has over 30,000 indigenous Assamese Muslim votes. File photo of an All Assam Students' Union (AASU) meeting in Guwahati. Former AASU general secretary Lurinjyoti Gogoi (standing, in blue shirt) formed the Assam Jatiya Parishad in 2020. He contested from Duliajan and Naharkotia in this election (Image: PTI).

Former general secretary of the All Assam Students’ Union (AASU), Lurinjyoti Gogoi, who formed Assam Jatiya Parishad (AJP) ahead of the election, has contested from two constituencies — Duliajan and Naharkotia.

People of Assam will definitely keep a close eye on both the constituencies as the fate of Lurinjyoti Gogoi will create a new wave of regionalism in the state.

In Duliajan, the key candidates this time are Terash Gowalla of BJP, Dhruba Gogoi of Congress and Lurinjyoti Gogoi of AJP.

In 2011, Amiya Gogoi of Congress won the seat by defeating Rameswar Teli of BJP by a margin of 3,336 votes.

In Nahorkotia, the prominent candidates this time are Taranga Gogoi of BJP, Pranatee Phukan of Congress and Lurinjyoti Gogoi of AJP.

In 2016, Naren Sonowal (Botali) of AGP won the seat defeating Pranatee Phukan of Congress by a margin of 3,531 votes.

In 2011, the seat was won by Pranati Phukan of Congress defeating Naren Sonowal of AGP by a margin of 14,397 votes.

During interrogation, they revealed their involvement in other cases of snatching in Guwahati city, the statement said. Guwahati: A suspected robber was injured in police firing as he was trying to flee, while four drug peddlers managed to escape despite policemen shooting at their car in Assam, officials said on Sunday. Both the incidents occurred […]

At the beginning of the Dimasa rule, Dimapur used to be the capital of the kingdom, which was later shifted to Malibang, now in Dima Hasao district of Assam. Guwahati: Assam Chief Minister Himanta Biswa Sarma on Sunday said that the state government will preserve the heritage of the 18th century Dimasa Kachari kingdom and develop its last capital […]

People of three districts - Cachar, Karimganj and Hailakandi- will also save time for their official works as they will not require to come to Guwahati for the same. Guwahati: Assam Chief Minister Himanta Biswa Sarma on Saturday said his government has sanctioned Rs 116 crore for construction of the mini secretariat of Barak Valley at Silchar, which is […]

The self-styled chairman of the United Kuki Liberation Front (UKLF), Lhunkhoson Haokip of Imphal West, had been absconding. Imphal: The NIA has arrested a self-styled chairman of the outlawed Kuki militant group UKLF for his alleged involvement in the pilferage and illegal sale of government firearms to various terrorist outfits to strengthen war stores and carry […]

Get The latest news, opinion and much more from north east part of India and India on Midage